After Verdi’s dissatisfaction with his second opera he nearly gave up, but thank goodness he didn’t because this third one is magnificent, apart from its rather weak ending. Placing the action in the 1940s rather than the original setting of 586 BC is a good idea, but it never really gelled and I found Daniele Abbado’s new production disappointing.

The singing however was quite another matter. Ukrainian soprano Liudmyla Monastyrska was spectacular as Nabucco’s adopted daughter Abigail. Covent Garden audiences who remember her terrific Lady Macbeth from June 2011 will know what to expect, and she certainly provided it, giving huge colour to a bland production. Her recitative, aria and cabaletta at the start of Act II were riveting — her voice so expressive and powerful.

Her fellow Ukrainian, Vitalij Kowljow brought a full rich tone to the bass role of the Hebrew high priest Zaccaria, and Italian tenor Andrea Caré sang beautifully in the tenor role of Ismaele who is loved by both Abigail and her half-sister Fenena. Ismaele loves Fenena and although the heavy presence of Marianna Pizzolato in that role was rather lifeless, she sang with a lovely clarity of tone. 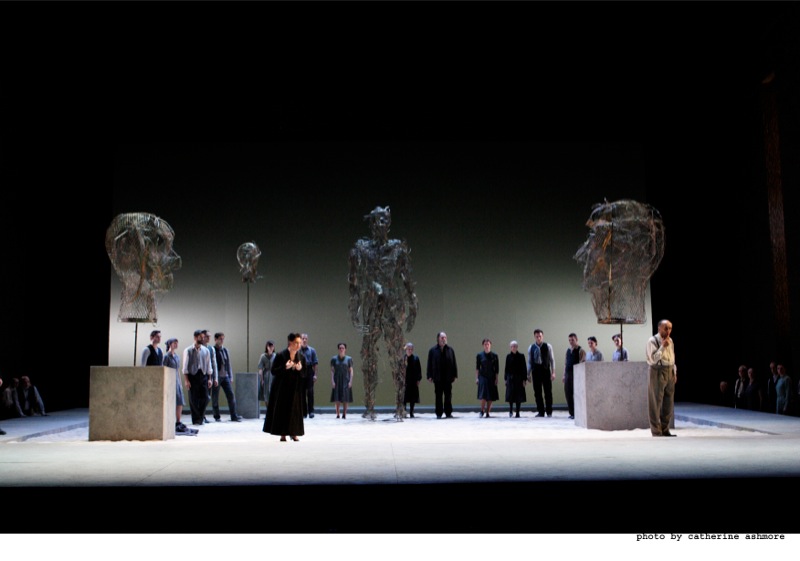 Conducting by Nicola Luisotti showed great attention to the singers, and the chorus sang superbly, with a lovely Va pensiero in Act III. Leo Nucci as Nabucco showed very well the confusion that Solera’s libretto gives him after he calls himself a god, and then produced a glorious Act IV aria accepting the God of Israel. The cello solo when Abigail shows remorse was beautifully played, and Luisotti produced fine musicianship from the orchestra.

From the Amphitheatre the movements of the chorus looked rather contrived, with one group of people waiting to move forward before another group moved aside, though it may have appeared more natural from lower in the House. And the video projections were not fully visible from the front row of the Amphi rendering them only partially visible to nearly half the audience — no wonder it was not liked from the greater heights of La Scala. The fact that it’s a co-production with Milan, Barcelona and Chicago doesn’t surprise me in these days of austerity, but if resources are scarce perhaps we should leave such minimalist new productions to the English National Opera, with Covent Garden concentrating on bringing in world class singers, which they have done here to great effect.

Performances with this cast continue until April 8, and from April 15 to 26, Domingo takes over from Nucci — for details click here. On April 29 there will be a delayed live cinema screening, and it will be broadcast on BBC Radio 3 on June 8 at 6pm.