In the mid-late 1990s at my son’s high school in America, the janitor was accused of having been a Ukrainian concentration camp guard in World War II. Most of the students wanted to excuse him, because like the title character in this play, written about the same time, he was a nice guy who wouldn’t harm anyone … and it was all so long ago. 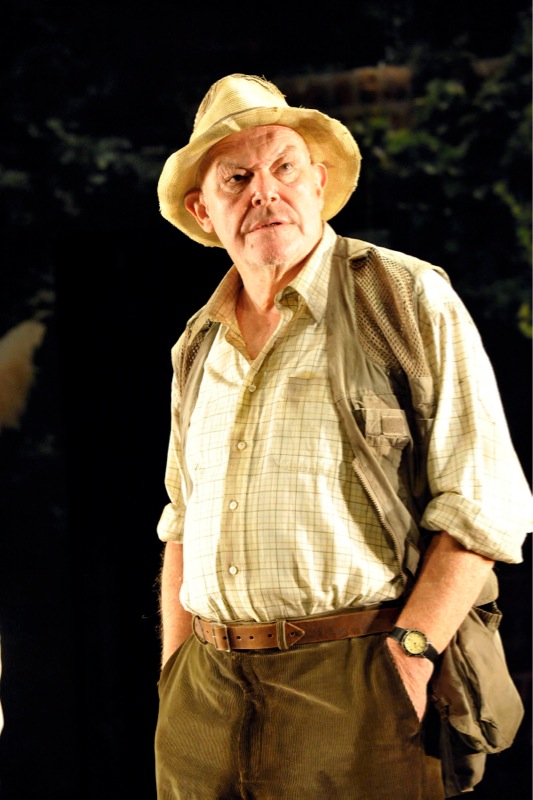 Forgive and forget they say, but forgiveness is the prerogative of victims, and as for forgetting, well the birds finally come home to roost in this clever drama by Ronald Harwood. A much-loved handyman has been with an English family since shortly after the War, and is now suddenly faced with two police officers accusing him of being involved in the genocide of 817 Jews in three villages in the western Ukraine. Timothy West gives a realistic and sympathetic performance of this gentle fellow called Wronka, with Adrian Lukis and Caroline Langrishe portraying Julian and Cressida Field, the couple he works for. They react in different ways. Julian provides some comic relief, and understands guilt, seeing it in Wronka’s calm reactions to his late wife’s outrages, but Cressida adores the lovely man who joined the family before she was born. She cannot cope with the idea he might be guilty, and towards the end Harwood cleverly allows her to show the face of holocaust denial.

The Fields hire a highly intellectual solicitor, beautifully played by Carolyn Backhouse, who expresses some elementary truths about anti-Semitism and responds to the claim that Wronka is not evil by dismissing the concept as it “absolves us of responsibility”. Indeed nice people can participate in some very nasty acts, but even if he is guilty as the police seem to think, how could one possibly prove it more than fifty years later, when it’s one person’s word against another and memories can be unreliable?

The police, well portrayed by James Simmons and Anthony Houghton, are not quite without support, and as the play progresses we hear video testimony by Vanessa Redgrave and Steven Berkoff representing faces from the past. These vignettes suddenly draw us back to the early 1940s, to what actually happened when Jews from three villages were taken into the woods and shot.

Can Cressida Field ever truly believe Wronka was involved? I don’t know what Harwood’s original ending was, but he changed it, and in this fine production by Joe Harmston it works brilliantly. The birds do it.

Performances at Richmond continue until October 20 — for details click here — after which it continues on tour to: Malvern Festival Theatre, 22 – 27 Oct; Oxford Playhouse, 29 Oct – 3 Nov.