This concert was a fine mixture of solos, duets, and trios, plus two choral sections, and purely orchestral pieces played here by the Royal Philharmonic Orchestra under the direction of Claudio Vandelli.

It began with that delightful Rossini overture to L’italiana in Algeri, which starts almost silently before moving into higher gear. This gave just the right bounce to open an evening that ended with four encores, one for each of the singers, and one — specially commissioned — for all three. 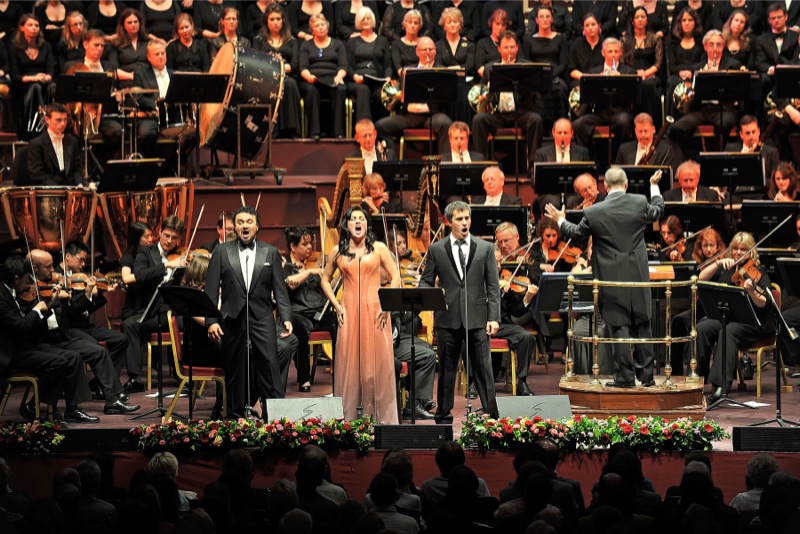 The highlight for me was Erwin Schrott and Anna Netrebko singing that glorious duet from just before the end of The Merry Widow. In the operetta, the merry widow, Hanna Glawari demands Danilo start talking sense, and he interrupts her in the middle of the syllable lieb…, with Lippen Schweigen. Starting with those words, their voices melded beautifully together. Ms. Netrebko, in her lovely second-half dress, was the most perfect Hanna Glawari one could ever wish to see and hear, and Schrott’s singing … hab’ mich lieb came over with huge feeling. As they slowed the tempo down the conductor followed with the orchestra, and dancing round the front of the stage they exuded the magic of being in love.

This was the antepenultimate item, followed by an instrumental excerpt from Carmen before all three singers returned to perform the trio at the end of Gounod’s Faust. In the meantime the Philharmonia Chorus had given us the humming chorus from Butterfly and the Hebrew chorus Va Pensiero from Nabucco. The main singers gave us just the right amount of action, as when Ramon Vargas and Anna Netrebko performed that lovely duet O soave fanciulla from the end of Act I in La Boheme, waving as they left, as if to meet their friends at the café in Act II. Vargas himself gave a superb rendering of Una furtive lagrima from L’elisir d’amore, and Anna Netrebko gave a rip-roaring account of the cabaret aria that Sylva Varescu sings at the beginning of Kálmán’s Csárdásfürstin. Here was the vibrant young cabaret singer who deserves the man she finally marries.

One of the intriguing things about this concert was Schrott’s accompaniment by two additional instrumentalists, František Jánoška on the piano, and Mario Stefano Pietrodarchi on the bandoneon, a concertina-like instrument often used in tango ensembles. This lightened the tone for Schrott’s excellent bass, taking us from Banquo’s aria to the infectious sound of zarzuela, including a superbly performed excerpt from one by Sorozábal.

At the end of the show, all got bouquets: Vargas bestowed his on a young lady in the front row, and Schrott then leapt from the stage to give his to a young girl further along. Finally they returned for four encores: O mio babbino caro, from Anna Netrebko, Granada from Ramon Vargas, Rojotango by Pablo Ziegler from Erwin Schrott, and finally finally a new commission called Home by Kempe, sung by all three.

A fabulous evening, only spoiled by odd audience members whose cameras lit up during the performance.